Christina Hendricks smoulders her way through the September issue of British GQ magazine in a 50’s style photo-shoot wearing mostly underwear and looking oh so hot!  Given that this is GQ (a lads mag) the empasis is of course on  showing as much flesh  as possible but it is becoming a rather tiresome theme for Ms Hendricks to appear in yet another under-garment.  She is an Emmy-nominated actress, oozes elegance and style and has a stunning face and beautiful complexion worthy of gracing the cover of any magazine – move away from the tits and hips editorial and lets see her in some proper clothes! 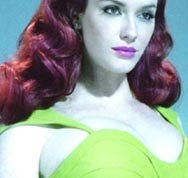