“The exhibit gathers around 80 creations, mainly from Musée Galliera’s vast private collection, spanning the 55-year long career of Germaine Krebs (aka Madame Grès). It includes pieces on loan from collectors including Azzedine Alaïa and U.S. Vogue’s Hamish Bowles. Fifty original photographs, style magazines and bold jewelry pieces are also presented, along with a series of sketches by Grès herself.”

The choice of site, among the most beautiful sculpture museums in Paris, was no coincidence, as Grès herself trained as a sculptor. Working rarely with patterns, she constructed designs directly on the body. ‘For her working with fabric or stone is the same thing,’ explained Saillard, who views the late designer as a pioneer of sophisticated minimalism.”

“According to Saillard, Madame Grès essentially reworked the same dress, pursuing her ideal of the seamless garment with economy of line and volume. The designer was also a great colorist, using a broad palette of hues, from sand to sun yellow, bluebell, raspberry and coral.”

“Known as a designer’s designer, Grès’ heyday was in the Thirties, Forties and Fifties. But she also saw a comeback in the Seventies, with Yves Saint Laurent and Issey Miyake among advocates of her work. Marlene Dietrich, the Duchess of Windsor, Grace Kelly and Paloma Picasso were among the label’s fans. ”

“Contrary to the designs of male couturier greats such as Cristóbal Balenciaga and Pierre Balmain, who loaded pieces up with padding and underskirts, Grès’ creations were extremely light, supple and unstructured, according to Saillard. He said the designer liked her models to wear her dresses without underwear, as she wanted the clothes to be in direct contact with skin.”

“Grès died in obscurity in 1993 in a retirement home near Toulon, France, a few days before her 90th birthday. Her death was only made public a year after the event. The last dress she ever made, a Japanese-style floral gown that features in the Musée Bourdelle show, was commissioned by Hubert de Givenchy in 1989.” 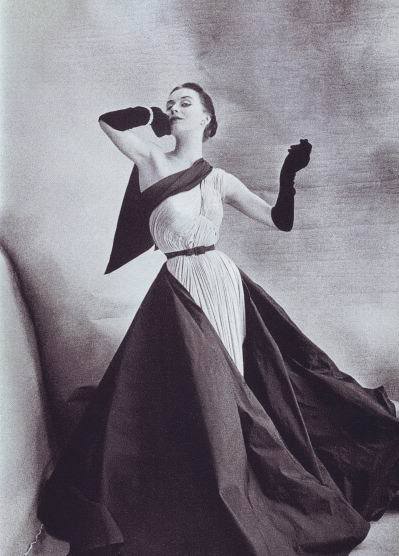