Amy Winehouse attended the premiere of Psycosis with boyfriend Travis  looking hip and unusually upright in a purple mini-dress and Christian Laboutin heels.

But after attending the film and being mobbed by fans flashes of the old Amy appeared –  she  dropped her fag and mobile phone ending  up with a painful-looking scratch down her leg.  Winehouse though showed she was still rock ‘n’ roll if not so upright as she  had to swap her heels for flat ballerina pumps. 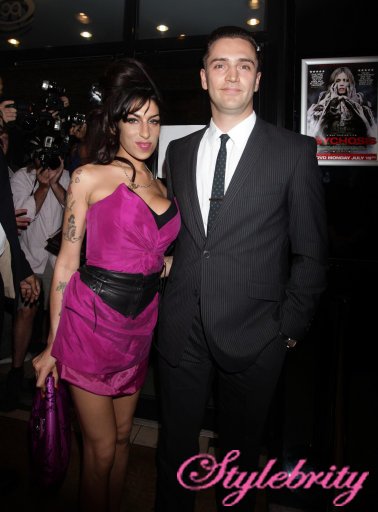 Director of the film Reg Traviss and girlfriend Amy Winehouse arriving for the premiere of Psychosis, at the Prince Charles Cinema in Leicester Square, London.