Adele For OUT Magazine – Pictures

“I always say I’m a singing lady, rather than a singer,” says Adele. “Singer is a big word for me. My interpretation of a singer is Etta James and Carole King and Aretha Franklin.”

“I’ve met people I admire, and people I don’t admire who are completely affected by their success, and I fucking hate them. There’s so many people who believe their own hype and treat people like shit, and if I was ever like that I would absolutely stop doing what I’m doing for a while and go and find myself again. I find it grotesque when people change because of it, but maybe it’s because they’re not as good at keeping in contact with the people who love them for a reason.”

“I don’t think I’ll ever forgive myself for not making my relationship with my ex on 21 work, because he’s the love of my life. Well, I would still be singing in the shower, of course, but yeah — my career, my friendships, my hobbies. I would have given up trying to be the best. He made me really weak, but at the same time really fucking fearless, so I managed to channel that. I don’t know if I’ll ever beat this album in terms of how people connect to it.”

“My music’s not stylized—it’s not sold by image, or by my sexuality, or aloofness, or anything like that. I think it would be really bizarre if I started doing gimmicks and stunts—it wouldn’t suit my music. I’ve got lots of friends who are artists and they love it. They’re, like, ‘I was born to perform,’ and I’m like, ‘Fuck off—no one’s born to perform.’ That’s like standing over there naked.” 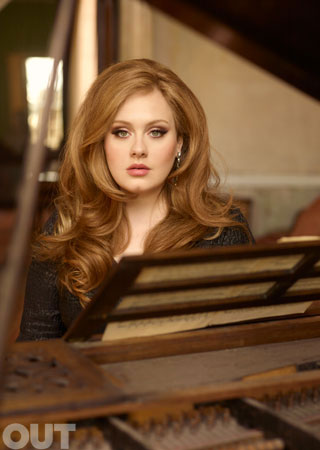 Tags: Adele for OUT Magazine
Posted in Uncategorized | No Comments »